Here are a few ways to enhance Photoshop performance:

The faster the processor you’re using and the more random access memory (RAM) you have installed on your computer, the faster and smoother Photoshop will run.

If upgrading your computer is not an option, read on to find out how you can help Photoshop run more efficiently.

Efficient Use of Memory

Photoshop really likes RAM and will use as much spare memory as the settings will allow. The 32-bit Photoshop version on both Windows and Mac are subject to certain limitations in the amount of RAM that the system will allow the program to utilize (roughly 1.7-3.2GB depending on the OS and PS version). Conversely, the 64-bit versions will take as much RAM as you can give. 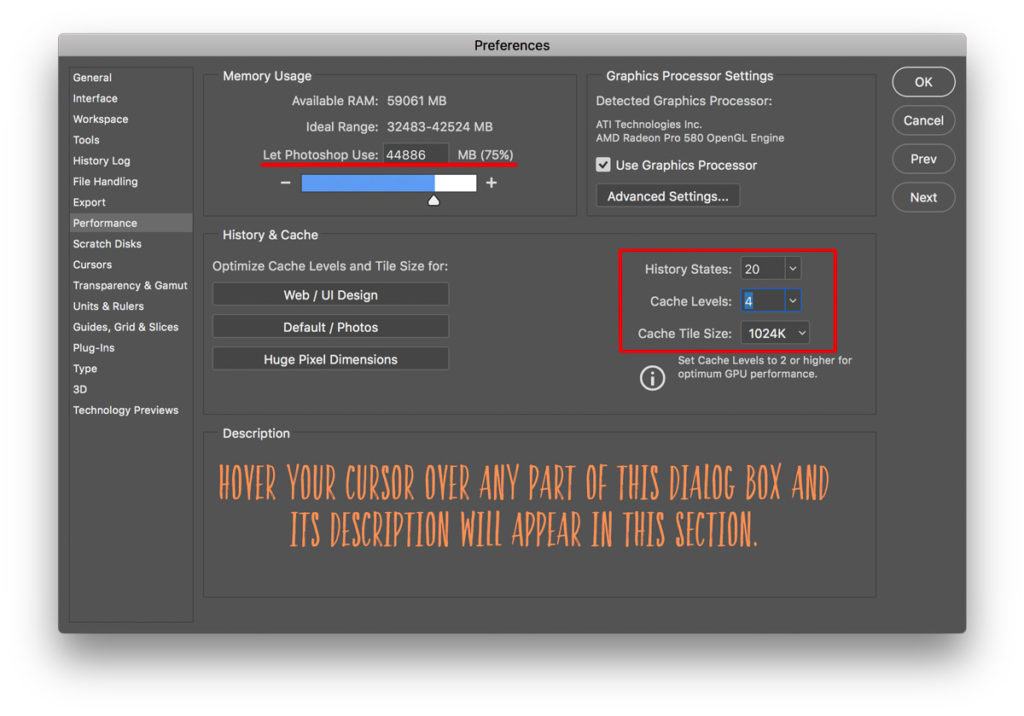 Photoshop CC does not have increased memory usage over Photoshop CS6. Its memory behavior is identical to Photoshop CS6 (and CS5, CS4, etc.). If Photoshop is taking more than 20 seconds to load something is wrong with your system. Normal launch is under 7 seconds, and with an SSD it’s under 2 seconds.

If the Memory Usage is set higher, the Operating System (OS) of your computer will start competing with Photoshop for the remainder of the RAM. The result will slow down the entire computer – not good. Photoshop may be happy, but your computer may crash or freeze. It does little use to run Photoshop at a faster speed if everything else slows to a snail’s pace and you loose work to a system crash.

Once your Memory Usage limit is set, check the efficiency status in either the Info Panel Efficiency readout, or in the bottom left corner of any of your open PSD files.

If the value is below 100%, it indicates that if you allocate more RAM to Photoshop, the operations will perform faster. You can close other applications running in the background as well as images that you are not working on to increase efficiency.

Photoshop allocates memory up to the limit you set in Memory Usage Preferences, then reuses that memory. It won’t release the memory until the OS needs it, or you exit Photoshop.

If you are experiencing any troubles with your Photoshop CC performance it is possible that the issue is due to external factors such as corrupt fonts, third party plugins or utilities. Try cleaning up or re-installing your plugins, utilities and fonts, some of them may be significantly slowing your PS.

Mac OS X has fairly good memory management but it’s not perfect, and sometimes RAM can be held unnecessarily in the “inactive” state despite the contents no longer being used. If you need to free up some RAM to speed up your computer performance you can force Mac OS X to clear out inactive memory.

Going a step further in gaining max efficiency in Photoshop, a lot is hinged on the configuration of the disks to avoid performance bottlenecks.

Without saying the more RAM the better but additionally one wants 4 drives, preferably all SSD.

#1 – A dedicated drive that PS is installed on, separate from your C: or the drive the OS starts from, 256 gig should be enough. Also keep Lightroom, Capture One ect. on this drive;
#2 – A working drive where you save and open your PS documents while you are working on them, 128 gig should be enough
#3 – A dedicated scratch disk that is kept absolutely clean, 64 gig should be enough. This should be the primary scratch disk. Can fill up if large amount of documents are open at once, getting a 128 or 256 gig will help.
#4 – A storage drive to archive completed jobs, for which a standard HDD is good enough.

Configure your scratch disks so that the disk the OS and PS are installed on are not at the top, the Dedicated scratch disk should be first, then the working drive then the storage, like in the screenshot below: 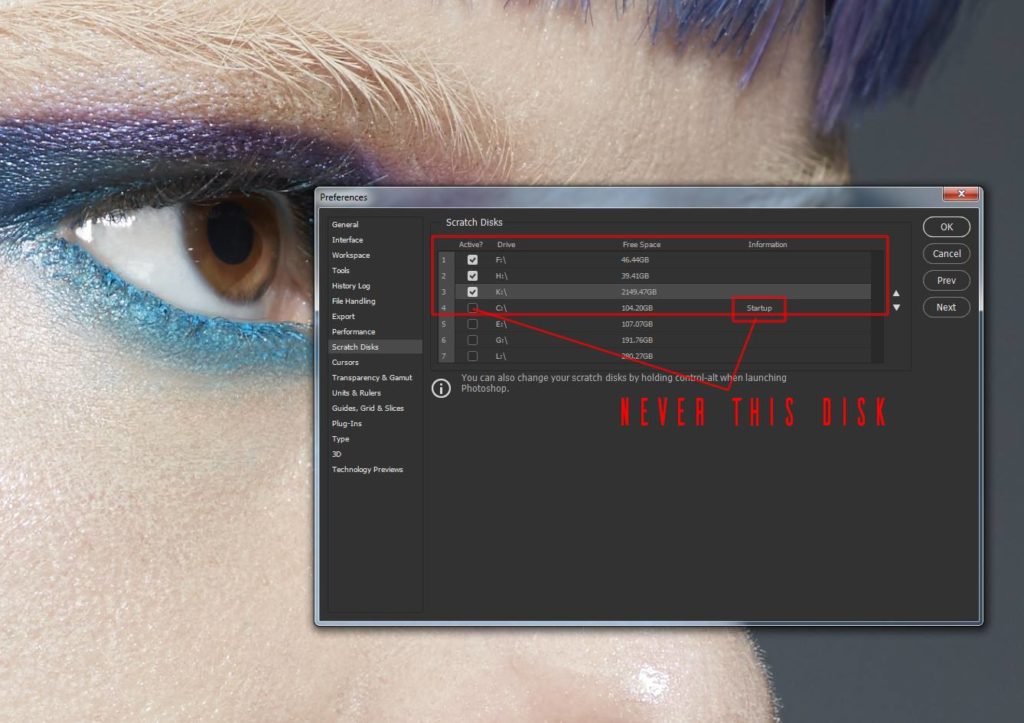 END_OF_DOCUMENT_TOKEN_TO_BE_REPLACED

The Differences Between Levels and Curves in Photoshop

During the journey to become proficient with Adobe Photoshop, two tools - Levels and Curves - will likely beg the question: what is the difference between them? This video by Unmesh Dinda of PiXimperfect, details their similarities and differences. When it...

END_OF_DOCUMENT_TOKEN_TO_BE_REPLACED

This post is long overdue, but better late than never. I recently had the honor to spend a couple of hours speaking with the Adobe Photoshop Engineers and Product Quality team and share my retouching workflow steps with them. As...