During the journey to become proficient with Adobe Photoshop, two tools – Levels and Curves – will likely beg the question: what is the difference between them?

This video by Unmesh Dinda of PiXimperfect, details their similarities and differences.

When it comes to comparing Levels to Curves, Unmesh likens it to this: Levels is a basic calculator, while Curves is a scientific calculator. They perform very similar functions, but one is simple while the other has more options.

Digging into the tools themselves, the similarities become apparent. Moving the slider within Curves and Levels from left to right makes the darker parts of the images even darker. Sliding from the right corner to the left, makes the image brighter within both modes as well. Comparably, midtones and manipulating the RGB channels also react similarly between both tools.

Levels is considered a more simplistic method to use, as there are only the sliders to control. The ability to manipulate the black point of the photograph as well as being able to use the Eyedropper tools adds onto the list of similarities between the two tools.

Simply put, everything that can be done in Levels, can also be done in Curves. However, the same cannot be said in reverse. 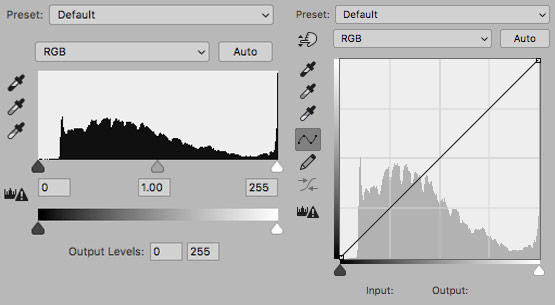 Where the differences begin is that within Curves, there is a hand tool, which allows you to click on a specific area of your image to manipulate that value. For example, clicking on the light part of a cheek enables you to move upward with your cursor to brighten that tone, or drag it down to darken it.

RELATED: A PSD That Shows You What Every Adjustment Layer Is Doing Via Curves

Curves uses an s-curve for plotting out most of the controls, with the ability to add additional points for further fine-tuning. Where Levels could only be dragged along the horizontal axis, Curves offers many more opportunities for precise adjustments throughout a tonal range.

Those two features are what truly differentiates Levels and Curves. In the end, it comes down to preference, and the method by which you wish to maneuver the tone or hue of your image.

END_OF_DOCUMENT_TOKEN_TO_BE_REPLACED

The Power of The Curves Adjustment Layer – Part 2: Manipulating Color

END_OF_DOCUMENT_TOKEN_TO_BE_REPLACED

In this video, we are going to take an introductory look at the Curves Adjustment Layer, one of Photoshop’s most powerful and flexible tools. In particular, the video demonstrates the strengths of the Curves tool: How to use it to precisely extend the...