This is an outtake from the RA online workshop Beauty Retouching: Skin & Skin Tones.

The technique of Dodging and Burning, where one selectively adjusts the exposure on various areas of a film is as old as photography itself.

With traditional film photography a dark room with a dim red light is used to aid the process because the Cone-Receptors in our eyes that are responsible for color and details can receive enough information to make out the fine details, while the Rod-Receptors that can only see the tonality and values rather than colors take over the majority of the visual processing – all while the film is safe from exposure from the lighting in the room.

Now with Photoshop as our workspace, to aid the process instead of using a dark room, we apply temporarily adjustment layers to desaturate the image in order to better see the variations of luminosity values in the area you are targeting.

However, the black and white conversion method you choose to help you spot the problematic areas can affect the final image.

We will go over the 3 most commonly used Black and White conversion methods, in relation to the Dodge and Burn workflow:

When an image is desaturated by moving the Saturation slider to the left, all pure colors (100% saturation, 100% brightness) are valued equally to 50% grey as this displays only the values of underlying colors.

Refer to the example image below:

Note, if one were to change the hue of the colors in the original image, it would not affect the conversion. Again, this is because all the colors at 100% saturation are valued equally, and it is because of this that the conversion tends to be more muted and with less contrast than others.

In this adjustment layer you are given sliders to manipulate the luminance of the 6 main colors individually: Red, Yellow, Green, Cyan, Blue, and Magenta. With this, you are given a considerable amount of control with this conversion method.

Personally, I don’t find this to be a very useful conversion to help with Dodging and Burning as you will be working on a drastically distorted representation of the image.

For example, bringing down the red slider in a Black and White adjustment layer can become problematic in a number of ways:

A good example I find, is a small scratch that is barely noticeable. Under a B&W temporary adjustment layer tweaked to darken the reds it will stand out a lot more than it actually is in the color version of the image, and you will dodge it a lot more than it really requires as a result. This method often causes more problems rather than actually helping.

For demonstration purposes, refer to the image below where I have added an artificial scratch: 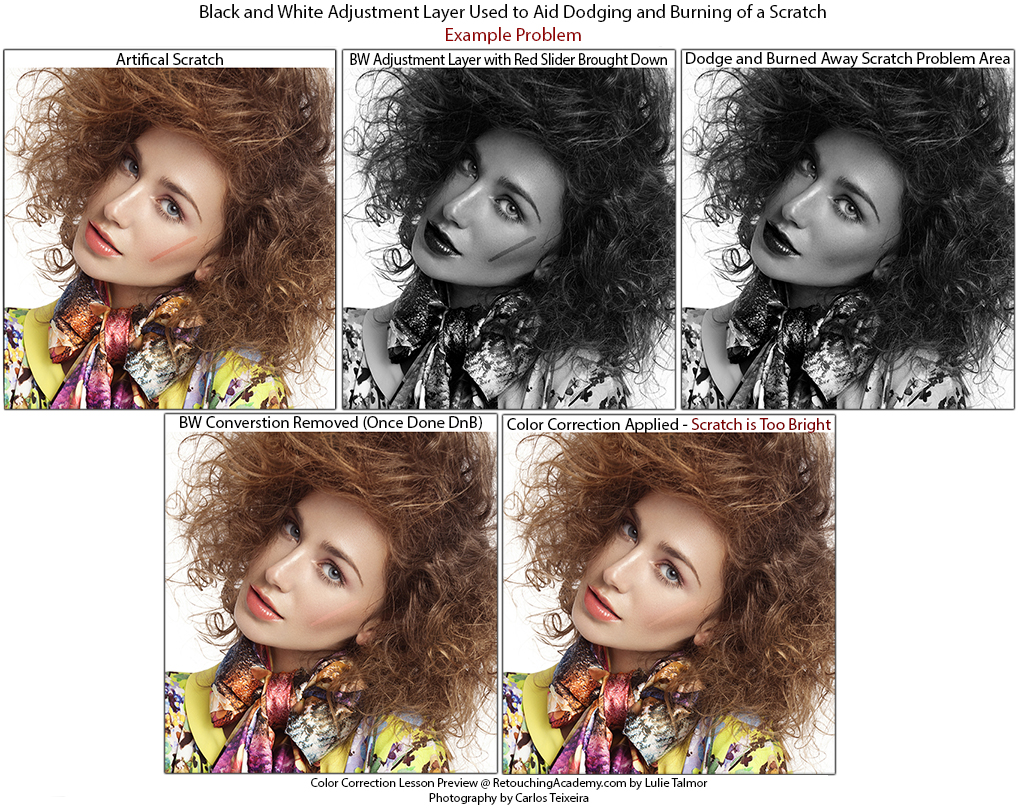 Aside from being a different, more red, shade of skin in the original, it will appear very dark after this adjustment layer is applied. Since one evens out the irregularities of the luminosity on the skin when dodging and burning, the resulting image will have the scratch appear too bright/bleached, and will need to be corrected once the black and white adjustment layer is removed.

Refer to the image below for an example with a 50% grey layer set to Color Blending mode used for the conversion instead.

As a result, the problem does not occur, and the scratch has been removed seamlessly: 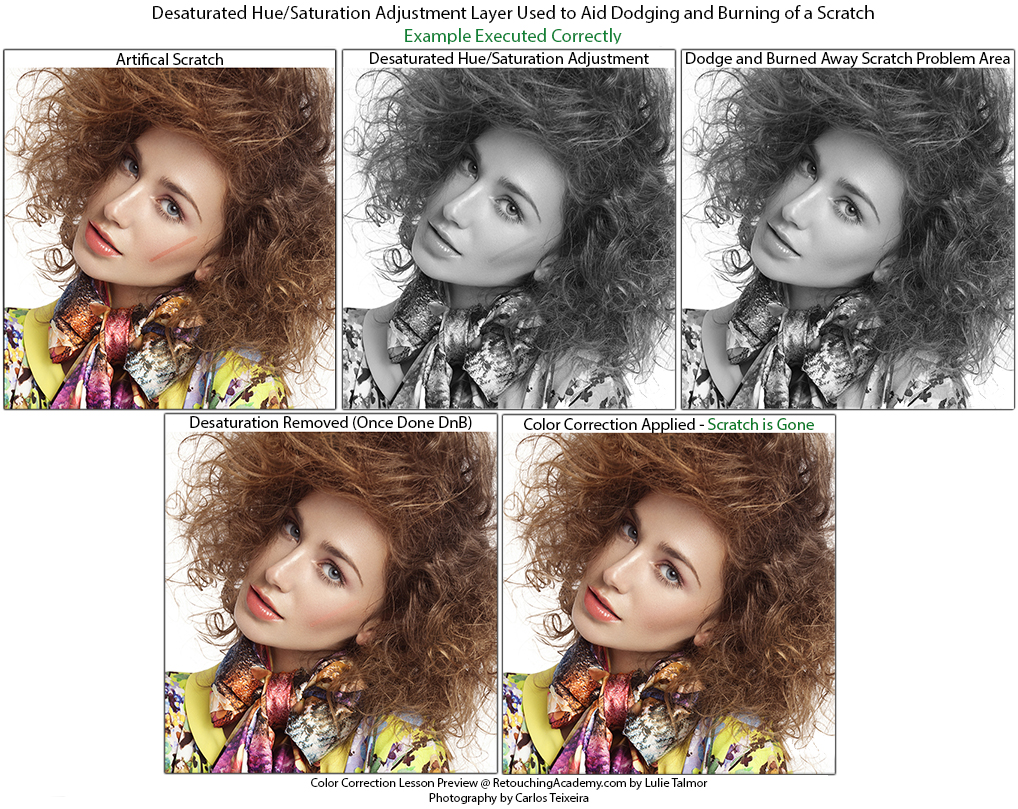 This conversion best represents the luminosity of each color that the human eye perceives.

This conversion is similar to Black/White Adjustment Layer, except the luminosity value for each color cannot be adjusted but is fixed to that which most closely represents the values that the human eye gives to each color. For example, 100% saturated Blue is “darker” than 100% saturated Yellow.

Refer to the Example image below:

Note that the change in colors in the original affects the conversion results.

Sometimes simply desaturating the image is not enough to be able to clearly see some of the slight variations that you are trying to target in the Dodging and Burning process. When this happens, adding an S-Curve Adjustment Layer that you are constantly adjusting on top of your Black and White Conversion is the best solution.

Below is an example of Boosting the Contrast so that the differences on her face become more noticeable:

In reality this adjustment layer is always changing as you move from one area to another. If my next area to focus would be the hair, the then this S-curve adjustment is too dark for that area and I would make a new Curves adjustment by sampling and dragging from the high and low lights in the hair.

Related: The Visual Aid script on our Beauty Retouch panel uses the Black & White conversion method that gives the best luminosity representation of the colors, in just one click.

This way the spectrum in the original image that you are working on is not altered, yet you can clearly see the details you need for your Dodge and Burn workflow.

What Does This Mean?

For temporary adjustments to aid in the Dodging and Burning part of your workflow, I would not recommend using the Black and White Adjustment Layer for a desaturated conversion or at least be aware to the problems it can cause.

I would recommend using the 50% grey layer set to Color Blending Mode as this is the most accurate representation of the luminosity values in the image, which is what one usually targets when Dodging and Burning.

Desaturating with a Hue/Saturation Adjustment Layer is another fine option. The differences between the Hue/Sat adjustment layer, and the 50% grey layer set to Color are minor. Only drastic color changes would bring up the differences between them, and even this can be avoided if the correct corresponding color correction method is used for which ever desaturation conversion you prefer in your Dodge and Burn workflow. This however is part of another, larger section of my Color Correction Lesson and will be discussed in an upcoming workshop this July (this online workshop has already passed).

Special thank you to Carlos Teixeira and team for allowing me to use his image (Cosmopolitan Argentina) for this article.

END_OF_DOCUMENT_TOKEN_TO_BE_REPLACED

The difference between a professional retoucher and an amateur is how they handle skin texture. While the average person may be content with editing their selfies using Facetune, the results wouldn't fly in the professional space. To this end, dodging...

END_OF_DOCUMENT_TOKEN_TO_BE_REPLACED

Retouching skin requires attention to detail and accuracy, but not every technique has to be overly complicated or time-consuming. Frequency Separation has grown in popularity due to its ease of use, making it a convenient method for retouchers from beginners to professionals.

END_OF_DOCUMENT_TOKEN_TO_BE_REPLACED

5 Mistakes To Avoid While Dodging and Burning

Dodging and burning is an essential technique in any retoucher’s toolkit. However, it can be a somewhat tricky method to grasp at first. While there are common mistakes that can be apparent right from the start, such as too...

END_OF_DOCUMENT_TOKEN_TO_BE_REPLACED

Introduction to Retouching Skin in Photoshop

When you are first learning how to retouch skin in Photoshop, it can seem like a genuinely intimidating task. There are many techniques, with every experienced retoucher preferring one method over another. While we firmly believe that practice is...

END_OF_DOCUMENT_TOKEN_TO_BE_REPLACED

Practice makes perfect, which is especially true for a retoucher. It is important to practice various techniques for different applications so that you can begin to train your eye for what it should be editing. Noticing distractions, uneven tones,...

END_OF_DOCUMENT_TOKEN_TO_BE_REPLACED

Getting skin tones to look natural and flattering in your photographs can sometimes be a challenge. There are many causes of incorrect colors in-camera, from inaccurate White Balance to random colors from the subjects' surroundings reflected onto the captured...

END_OF_DOCUMENT_TOKEN_TO_BE_REPLACED

To become a skilled retoucher, you must master the use of the basic tools available to you, especially when it comes to perfecting skin. One such tool is the Healing Brush for cleaning up the skin by removing blemishes, wrinkles,...

END_OF_DOCUMENT_TOKEN_TO_BE_REPLACED

How to Reduce Unwanted Highlights on Skin In Beauty & Portrait Retouching

While retouching beauty, fashion and portrait images, you will often encounter strong highlights that may need to be reduced. While current makeup trends lend themselves toward a "glowing" look through the use of heavy highlighters applied to the skin,...

END_OF_DOCUMENT_TOKEN_TO_BE_REPLACED 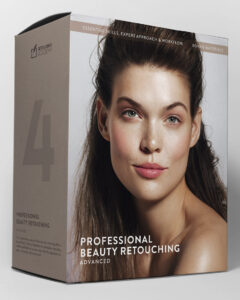