Every picture holds two stories: the one within the image and the one behind its creation. That’s what Benjamin Von Wong believes and wants to transport into his artwork. By now, the 28-year-old visual engineer has become notorious for his epic images.

“When you’re passionate, anything is possible!”

Photo Shoot: A Unique Event for Everybody

Whatever Benjamin Von Wong works on, he always wants it to be new and unique, and to give everyone on his team a memorable experience. Photographing people in a shipwreck under water or while they’re suspended off skyscrapers are but two examples. “What I try to instill in people is the idea that anything is possible if you truly set your mind to it.”

Ironically, photography was simply a hobby to the artist at first, which he stumbled upon while working in a mine in Nevada. Von Wong remembers: “I needed to find something to keep my mind busy. So when I looked up at the beautiful stars I thought: why not try photography?” 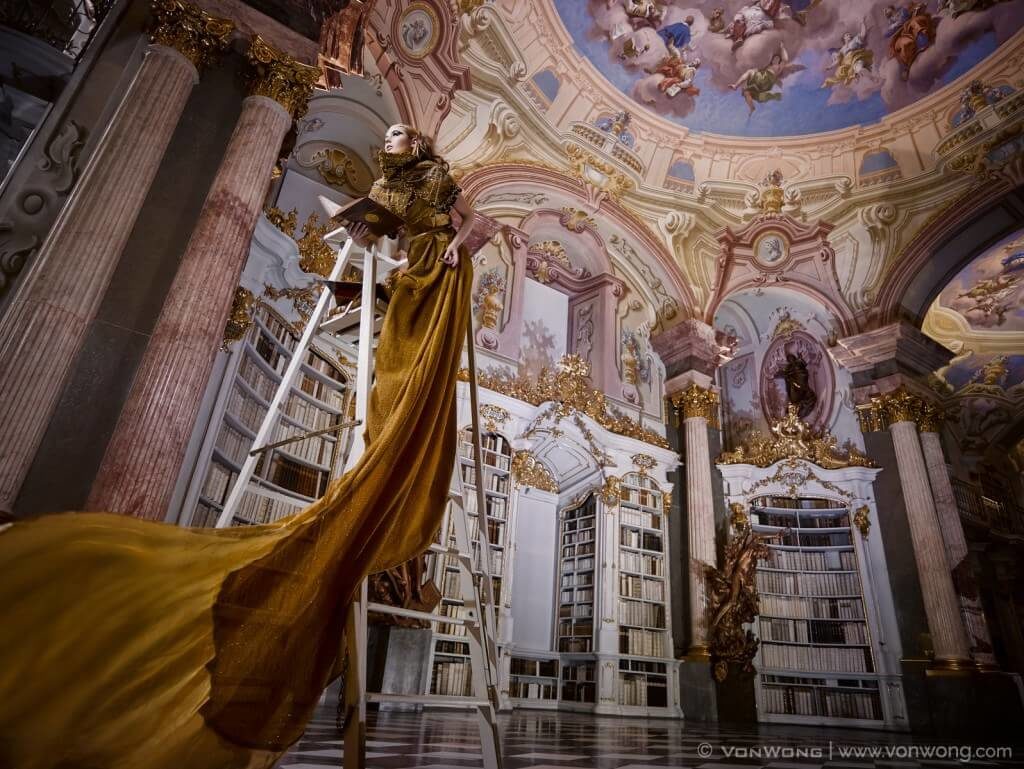 Not only does Benjamin Von Wong deliver his ideas and visions most effectively today, he also enjoys that photography and travel go well together.

“I want to live a passionate life and see new places. The best way to keep traveling was to keep shooting photos and to teach people about the process.

In this video, Benjamin Von Wong will take you to some of the locations of his breath-taking photo shoots:

Preparation, photo shoot, post-production – the young artist loves all parts of his work process. “First you find the models and interesting locations. Then, when the shoot begins, it doesn’t matter if it’s rainy or a model doesn’t show up, you have to do the best job possible.”

Once the camera starts rolling, Benjamin Von Wong automatically focuses on the job at hand, to be the creative director of the scene and keep everyone engaged. 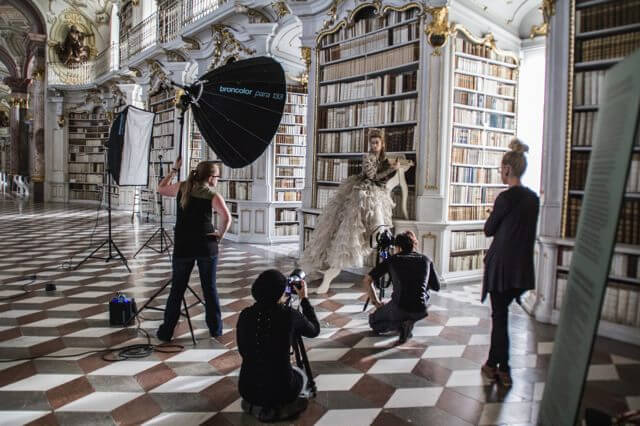 If you are interested in creating special effects too, check out Von Wong’s two tutorials on Wacom’s Create More website. In the exclusive eBooks, the artist explains step by step how he creates and applies special effects. 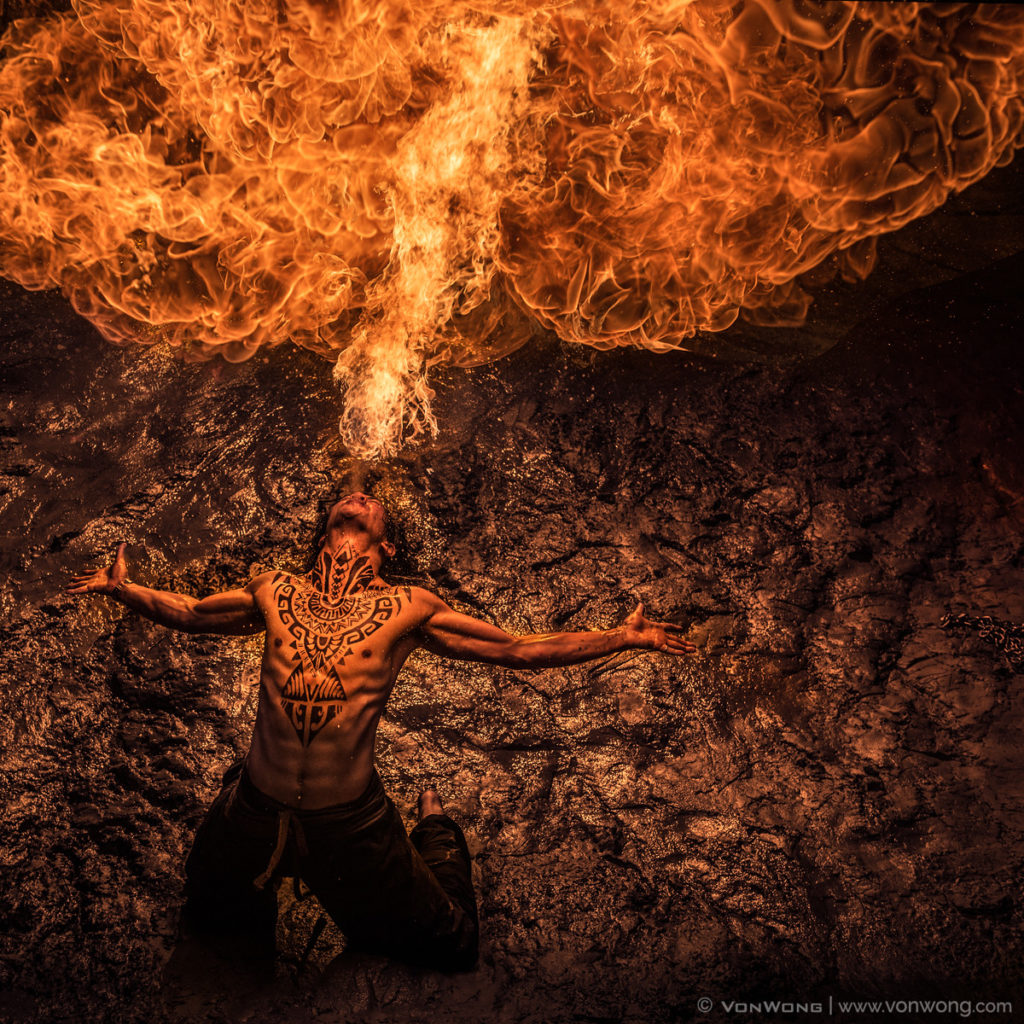 Even though his photography is striking in itself, Von Wong always expands the possibilities of his imagination in post-production. His main tools then become a Wacom tablet and a laptop computer – two things he carries along to every shoot.

“Post-production is when everything comes together: pre-production, the shoot itself, and my vision, it’s where I can fix mistakes and polish the images.” 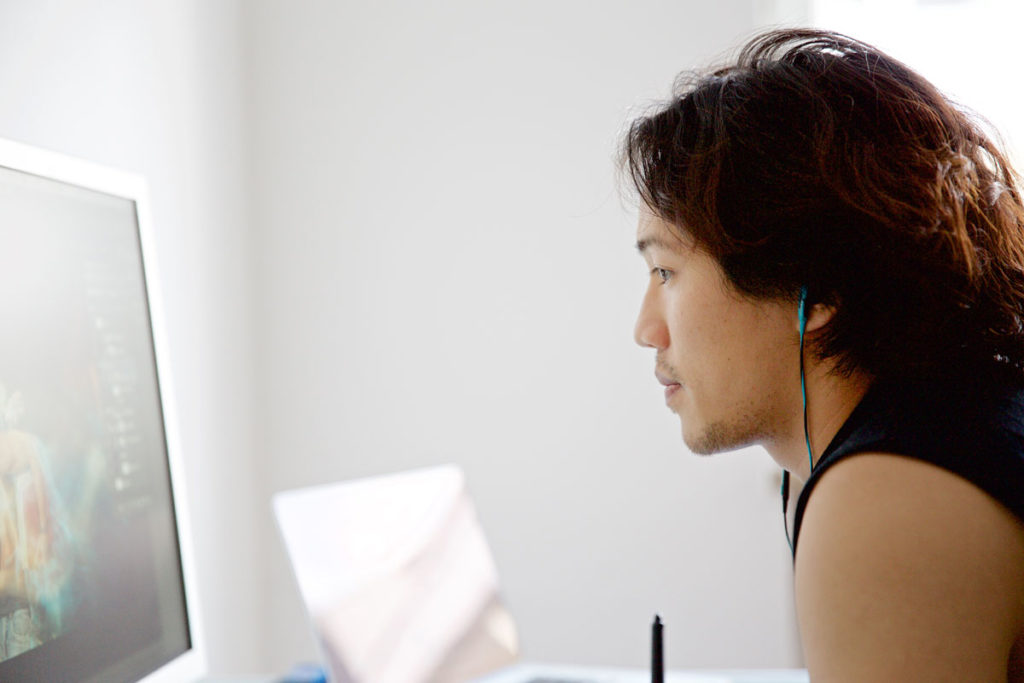 Best at Being Von Wong

With his background in engineering, Benjamin Von Wong knows how to tackle any creative challenge.

Additionally, 15 years of doing martial arts have given him a deep understanding of the human body, of movements and timing. Still, Von Wong doesn’t see himself as the “best” photographer or editor around.

“You need to find out what the unique attributes of your personality are and how to make them marketable”, he says. “The one thing I’m best at being is myself. The people who hire me don’t just hire a photographer, they hire a creative, they hire the whole Von Wong package. And I’m always challenging myself as an artist, always pushing the boundaries.” 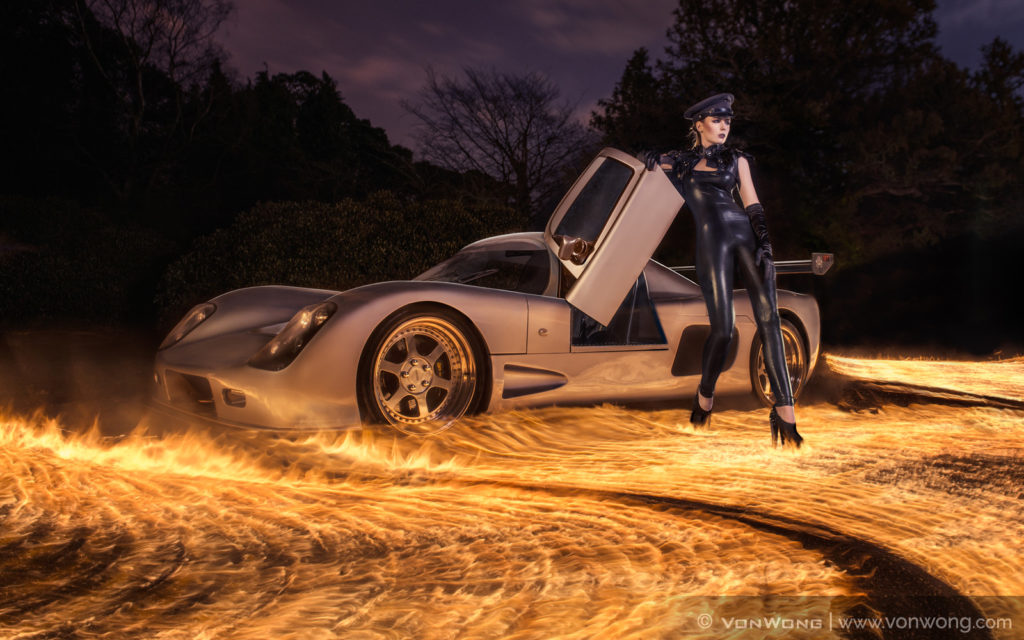 The Canadian truly did push his boundaries when working on the project that had the greatest impact on him as an artist so far: photographing a woman who was terminally ill.

“She wanted to leave a creative photo of herself that represented who she really was. To create this photo meant a lot to me”, Von Wong says.

All in all, the visual engineer finds that the most rewarding work is the one that delivers a deeper meaning and supports a cause – such as making a video that turned out to raise 1.8 Million dollars for a 4-year-old girl who was dying of a rare disease. With projects like that, Von Wong believes, it is possible to change the world. 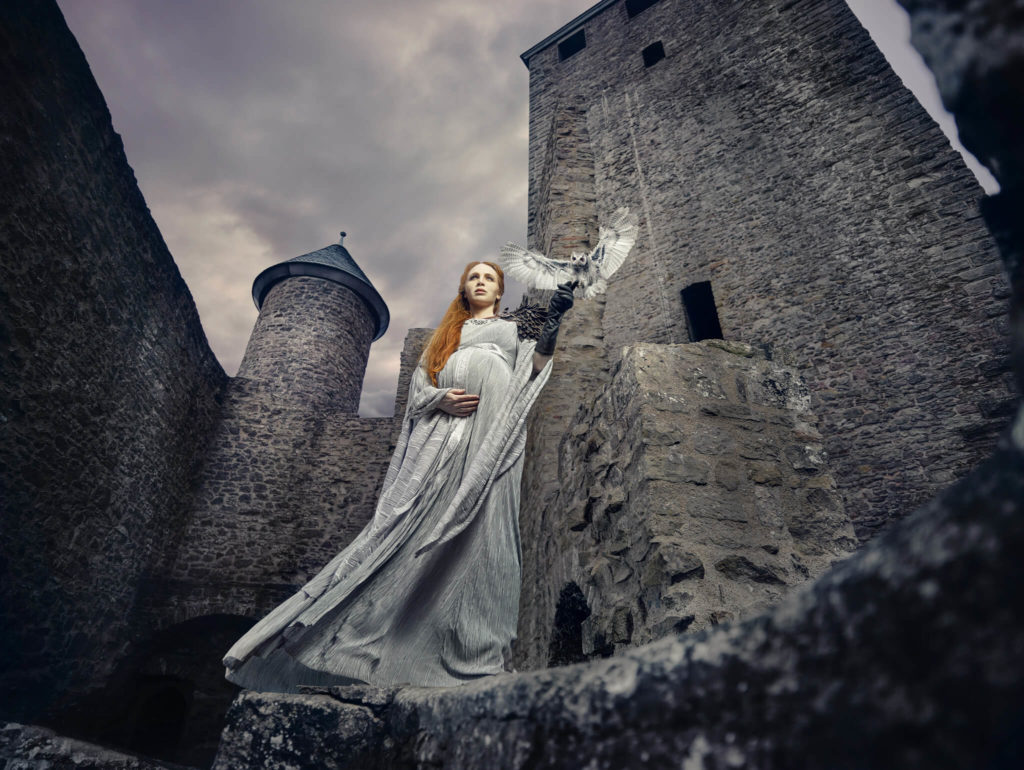 [RA]: Check out the BTS from this shoot as well as the video #SavingEliza mentioned above here.

Wanting to connect people through his art, part of Benjamin Von Wong’s work is to communicate his experiences through blogs and social media.

Even more so, the artist is convinced that if social media didn’t exist, he wouldn’t be doing what he does today. “It is crucial to me to share my work. I enjoy the feedback, the ability to reach people and to communicate with them.”

By now, Von Wong finds supporters all around the globe who are willing to join his photo shoots and even to help out if he needs a place to crash. Returning to his fans what they give him has become one of his main motivations to keep pushing.

“Being an artist is always going to be hard work. So if you aren’t passionate about it, if you’re not willing to go to the end of the earth to make it work, someone else is going to.” – Benjamin Von Wong 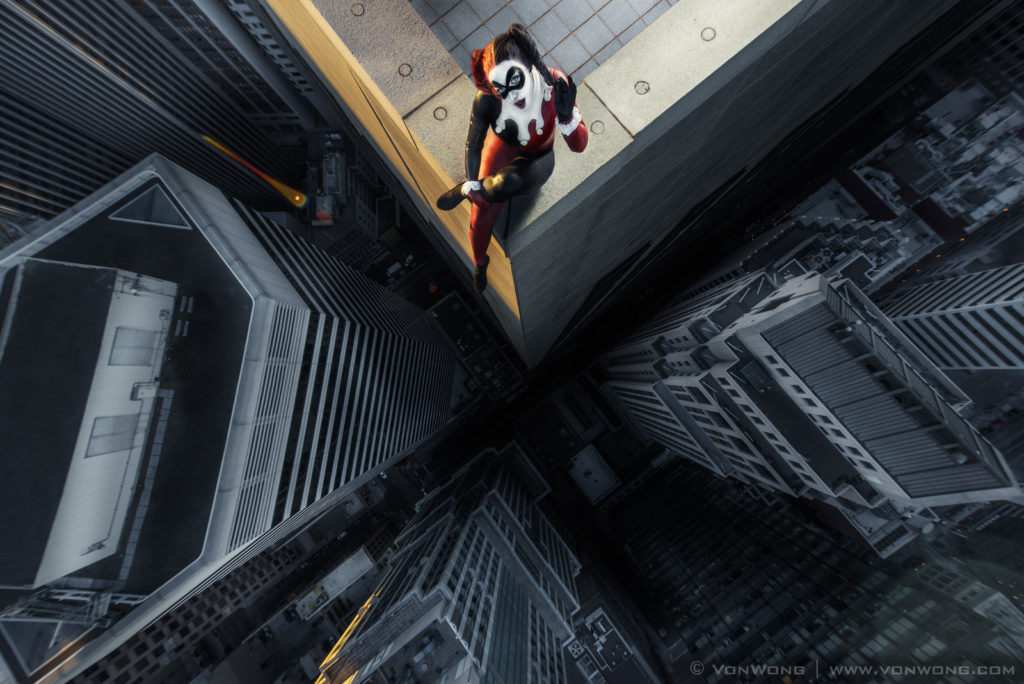 Wacom introduces the new Wacom Intuos Pro Small to its professional range of creative pen and touch tablets. Being the youngest and smallest in the family, it benefits from Wacom’s more than 35 years of know-how, innovation and experience in creating products for digital art and design.

END_OF_DOCUMENT_TOKEN_TO_BE_REPLACED

Passion, Drive & The Everyday Challenges On The Way To Your Success. Part 2

Continued from Passion, Drive & The Everyday Challenges On The Way To Your Success. Part 1 Problem #2  Self-doubt & Lack of inspiration When I was in high school and it was time to start thinking of my future profession, I wanted to...

END_OF_DOCUMENT_TOKEN_TO_BE_REPLACED

Passion, Drive & The Everyday Challenges On The Way To Your Success. Part 1

I used to think that the first two - passion and drive - inevitably would lead me to the ever-desired success as an independent artist because, as we all know, "Genius is 1% inspiration and 99% perspiration" and "The harder...

END_OF_DOCUMENT_TOKEN_TO_BE_REPLACED

Like a contractor’s hammer, a Wacom pen tablet is a mandatory piece of hardware for any creative looking to become a retoucher. The pen-to-paper-like experience allows the creative to work with greater precision and finesse, which is otherwise not...

END_OF_DOCUMENT_TOKEN_TO_BE_REPLACED

If you were to take Apple’s marketing at face value, you might think that the latest generation of the iPad Pro could be a true computer replacement. But can it replace a Wacom Intuos or Cintiq? In this video,...

END_OF_DOCUMENT_TOKEN_TO_BE_REPLACED

6 Tricks for Better Performance With a Wacom Tablet

For any professional retoucher, a graphics tablet is a necessity. However, there is an initial adjustment period, and like many tools, there are many customization options and little-known features. In the video tutorial below, Colin Smith of Photoshop Cafe demonstrates six handy...

END_OF_DOCUMENT_TOKEN_TO_BE_REPLACED

Back Up Your Wacom Tablet Settings

Dear RA Artists, A member of our RA Community reported some issues that he encountered with his Wacom tablet (Intuos Pro S) after updating his tablet driver to the latest version, from 6.3.15 to 6.3.16 today and we wanted to remind you to always back...

END_OF_DOCUMENT_TOKEN_TO_BE_REPLACED

How to Apply Textures to Create Interest in your Images

At times when you’re done retouching an image, it still feels incomplete, like something is missing to really make it come together. Sometimes the answer isn’t in further skin and hair retouching, but in your overall creative choices. Like most techniques in retouching,...

END_OF_DOCUMENT_TOKEN_TO_BE_REPLACED

So Do You Really Need A Wacom Tablet For Retouching?

One of the frequent questions asked by beginner retouchers, and both photographers and retouchers looking to improve their workflow is 'do I need a graphics tablet for retouching?' First let's look at the mouse. The computer mouse was invented over...

END_OF_DOCUMENT_TOKEN_TO_BE_REPLACED

If you have not changed your standard stylus nib ever since you purchased your Wacom tablet, take a peek into your pen stand and try different nibs until you find the one that works...