Guest artist Mark Soon continues our Making Of segment with the creation of his whimsical “Queen of Hearts” image. We first shared the finished image in our Artists You Should Follow feature in Issue 2 of [RE]TOUCHED magazine. It’s always a privilege to share another artist’s process and BTS story for a well-conceived project.

I hope you enjoy getting a peek behind the scenes at Mark’s creative work.

The idea for the Queen of Hearts image I created was deeply inspired by Tim Burton’s Alice In Wonderland movie; I’ve always loved Burton’s wacky design style. After several weeks of planning and getting Russian model Ekaterina Kochelovskaya in on my project, the work began. 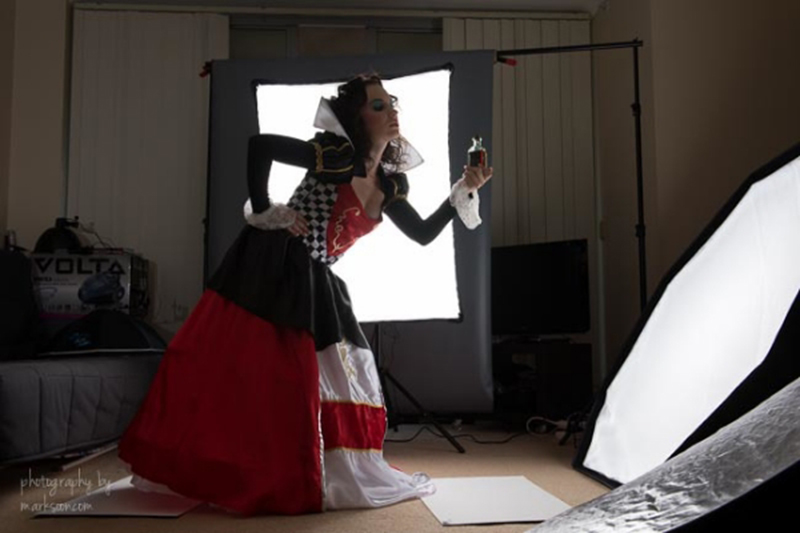 We sourced the right costume for the Queen and brought Elena in, a talented hair stylist who was responsible for bringing the fantasy hairstyle to life. Even though I photographed the model in my tiny one-bedroom apartment, I still managed to match the lighting to that of the background scene’s.

The background helped set the mood for this image and was the part of the production that took the most effort. I shot it at a warehouse near my place of work using my Fujifilm X100s. I used a tripod, so I could capture multiple exposures and later expand the dynamic range of the image. 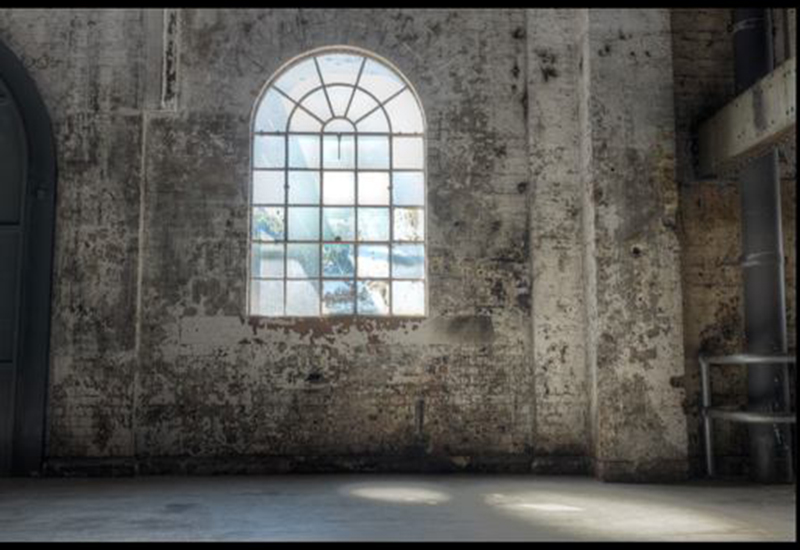 The warehouse setting was still a little too boring and slightly too industrial looking for a fantasy image, so I created a checkerboard pattern as an overlay for the ground plane using perspective transformation in Photoshop to adjust the vanishing point. 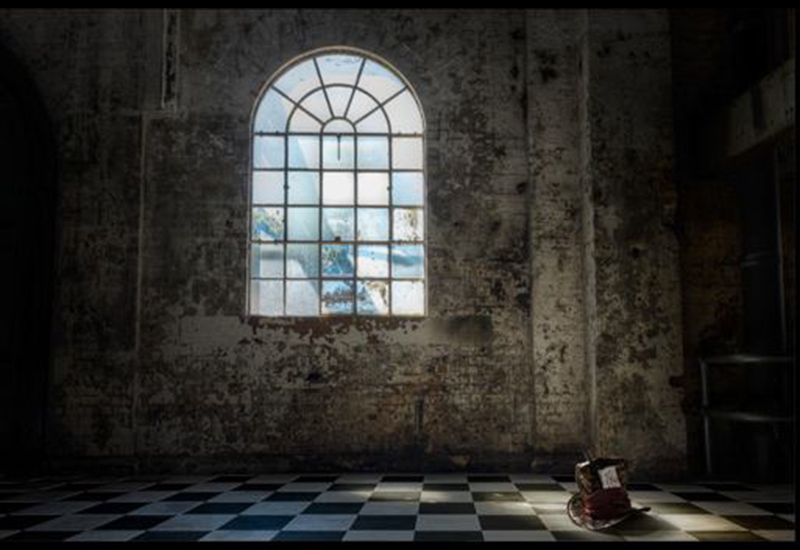 Although the background was looking cool, it needed more elements to tell the story of the Queen of Hearts. I used MODO, a 3D modeling application, to model and render the Victorian table, the flying cards, and the rose vine creepers along the wall.

Precise lighting within the application was required to match the background plate. 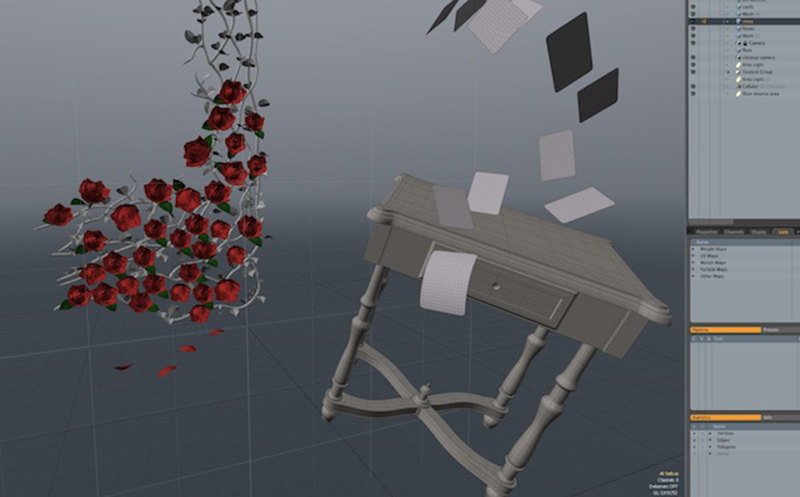 Once I had created and rendered all of the elements, I used Photoshop to bring everything together in a final composite image. I used different adjustment layers to unify the colors and lighting, then used Nik Color Efex by Google to add a filter and micro contrast to the entire scene to give it more “pop.” 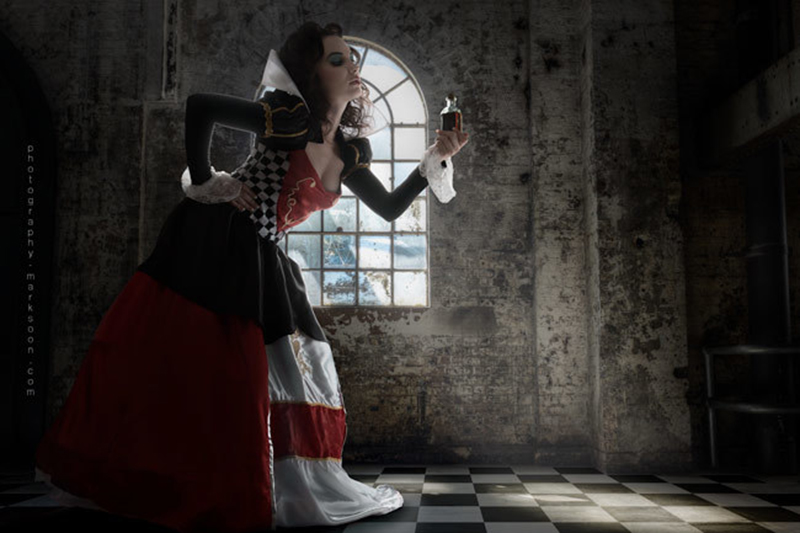 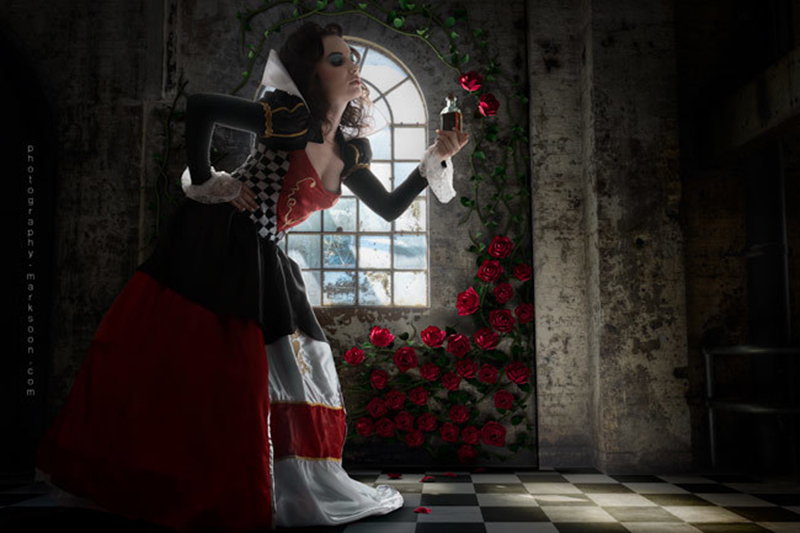 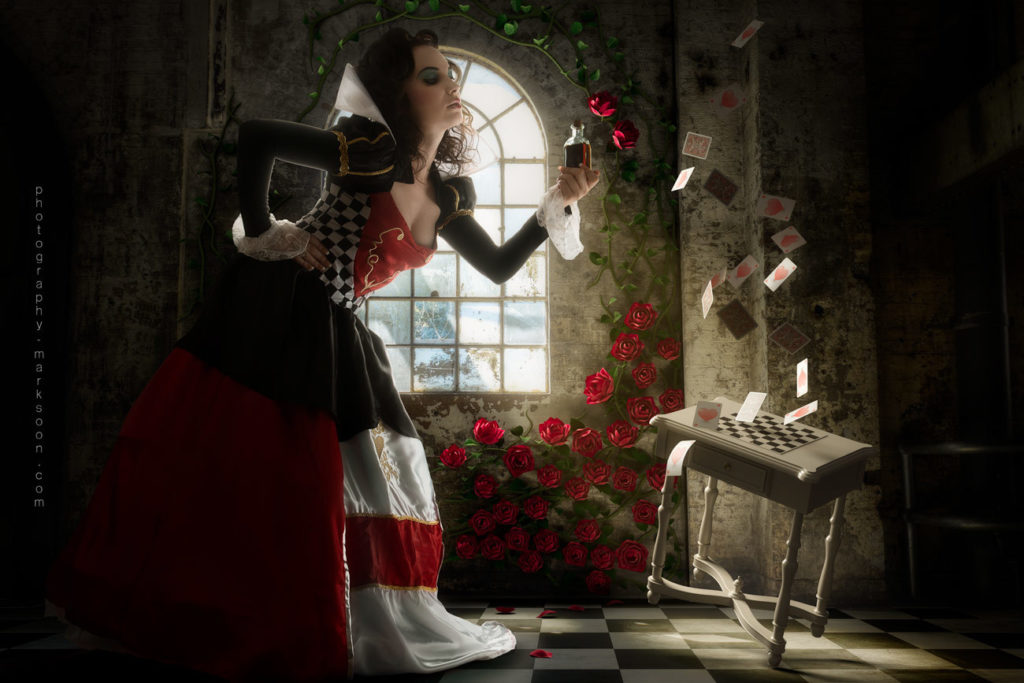 You can see more of Mark’s work here:

END_OF_DOCUMENT_TOKEN_TO_BE_REPLACED

How to Cut Out Hair Quickly in Photoshop

Masking out hair is often one of the most challenging and time-consuming tasks that a retoucher can have. This incredibly handy tutorial by Nathaniel Dodson of tutvid demonstrates how to cut out hair effectively in a short amount of...

END_OF_DOCUMENT_TOKEN_TO_BE_REPLACED

https://vimeo.com/144526468 As a commercial photographer I am constantly creating content for clients. As much as I love my jobs, I inevitably reach a point where I find myself with a hankering for my own personal creative outlet. This eventually leads me...

END_OF_DOCUMENT_TOKEN_TO_BE_REPLACED

This is the fifth in a series of interviews with established digital artists who exemplify another facet of the retouching industry. We hope you find this series both enlightening and informative. Milton Menezes (www.lightfarmbrasil.com) is a Rio de Janeiro  Brazil-based digital artist with 15 years...

END_OF_DOCUMENT_TOKEN_TO_BE_REPLACED

This is the fourth in a series of interviews with established composite artists who exemplify another facet of the retouching industry. We hope you find this series both enlightening and informative. Glyn Dewis (www.glyndewis.com) is a photographer, retoucher, and trainer located just...

END_OF_DOCUMENT_TOKEN_TO_BE_REPLACED

This is the third in a series of interviews with established composite artists who exemplify another facet of the retouching industry. We hope you find this series both enlightening and informative. Brandon Cawood (www.brandoncawood.com), is an internationally recognized and published photographer...

END_OF_DOCUMENT_TOKEN_TO_BE_REPLACED

Greg Agee (www.pixelogyarts.com) is a Fort Myers, Florida-based artist with 12 years experience creating digital composites. His work has received numerous awards, including the National Association of Photoshop Professionals (NAPP) Guru Award, and earned the distinction of having been accepted into the Professional Photographers...

END_OF_DOCUMENT_TOKEN_TO_BE_REPLACED

The Making Of The "Red Dress Twirl" Artwork by Shayne Gray

In this post our Guest Artist Shayne Gray from Toronto, Canada will walk us through the creation process of his "Red Dress Twirl" image. I am really enjoying reading through our Guest posts and seeing their BTS and Before images...