Seattle-based guest writer Josh Fredman is with us today to share how he avoids banding when creating gradient-based background in his images.

In this tutorial, we’re going to look at how to create banding-free gradients in Adobe Photoshop. Although often misunderstood, when used properly, gradients are a great tool that can be used in all sorts of applications including shading, or filling and patching any smooth surface such as a wall or a ceiling. Or for those times when shooting on a clean cyc wall isn’t an option.

One of the problems with gradients, however, is banding, so let’s look at how to resolve that. Once you know how to create a proper gradient, the potential for how to use them is unlimited.

For the purposes of this article, we’ll replace the existing background in the image of the dog with a gradient. 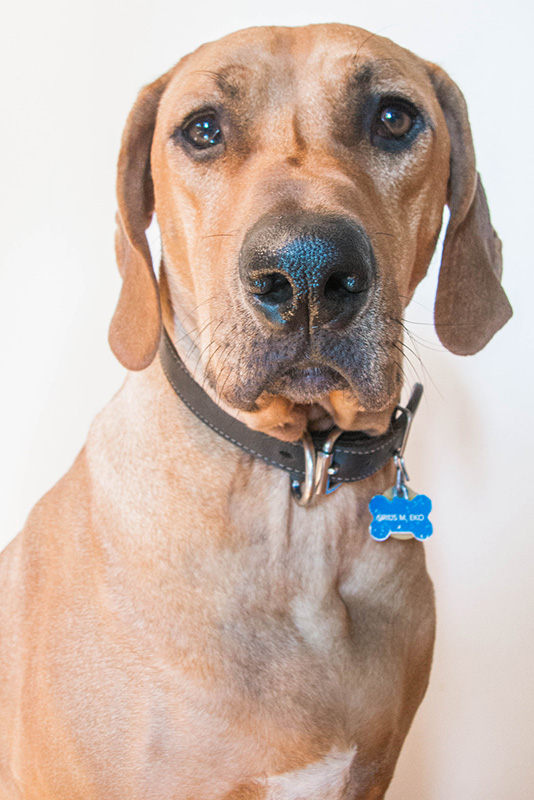 Let’s begin with a new file. You could just add a new Gradient or new Gradient Fill layer in your existing file, but creating an entirely new file will allow more flexibility when you need to adjust it later.

In general, you want your gradient to be approximately the same size as the area you’re adding it to or the file you’ll be placing it into.

To do this, I’ll create a new file that is the same size as a Canon 5D image: 5760 x 3840 pixels. We want to make sure it’s in 16-bit mode, which will help minimize banding, even if you typically work with 8-bit files. Even though 16-bit files use considerably more system resources, with gradients you can achieve a much smoother tonal range than in 8-bit mode.

Eventually, you can place your 16-bit gradient into your 8-bit file as a Smart Object. This will allow you the full tonal range of a 16-bit file on your gradient while still allowing you the ease of working with an 8-bit file.

If you’re concerned with file size or using too much RAM, you can rasterize your layer once you’ve placed and adjusted it. 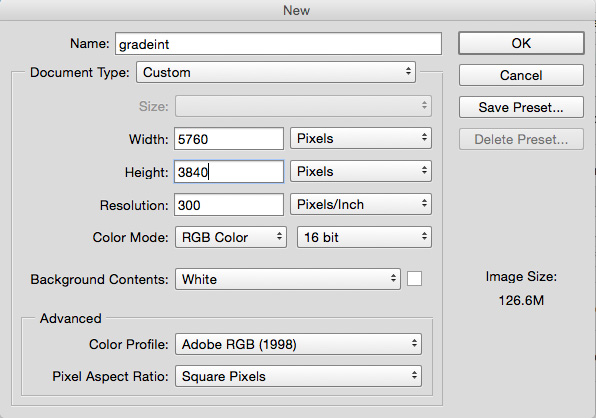 I’ve chosen a simple two-color radial gradient, but you can use any combination of colors you like. By increasing the scale, you can make the tonal range more or less subtle.

Note, however, that Dither has been left unchecked. This is important because we don’t want Photoshop to add any more noise than we can control. Click OK when you have the gradient looking more or less how you want it. 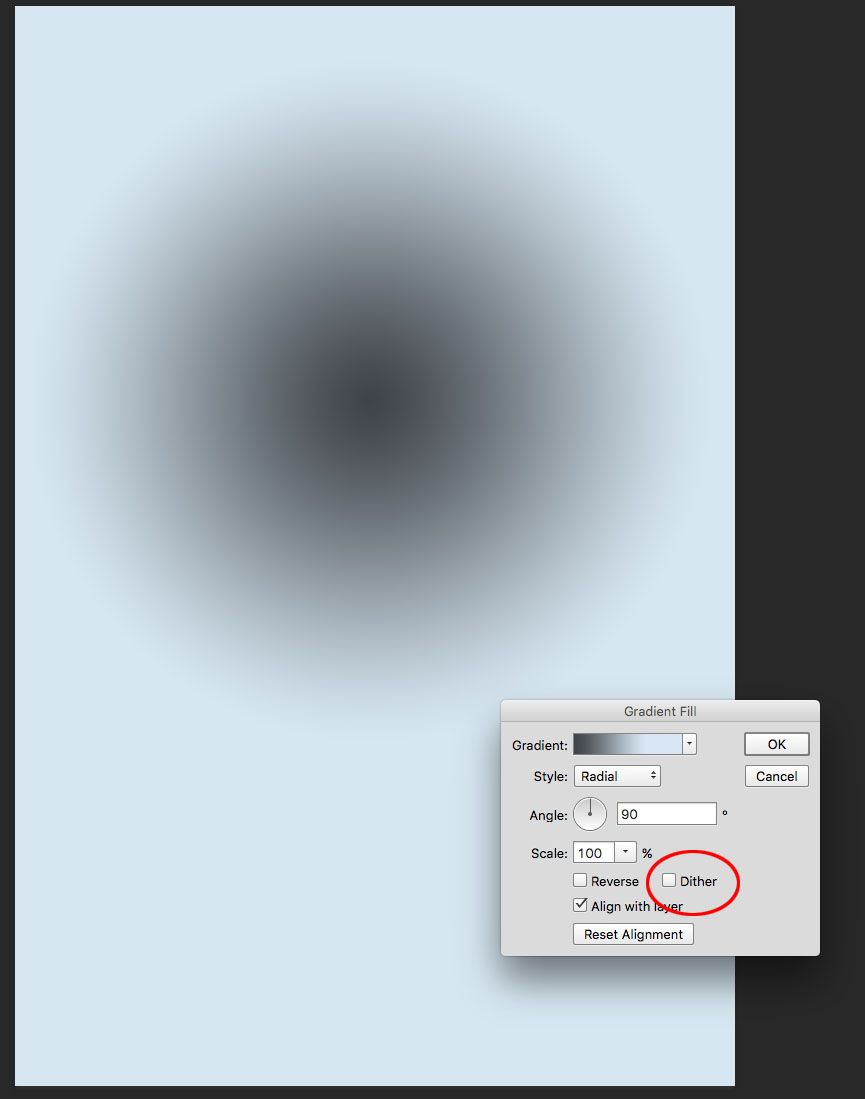 You can see at this point the gradient is banding quite heavily. Now we’re going to remove that.

To control the noise, let’s make a new layer, fill it with 50% gray color, and change its Blending Mode to Linear Light.

You could do each of those as separate steps, but by using the New Layer command, either via the Layer menu or by pressing Ctrl/Cmd+Shift+N, you get a handy dialogue box.

Here you can name your layer, select its Blending Mode and in doing so, you’re given the option to fill the layer with 50% gray color.

Once we’ve done this, we’re going to add noise to the new layer. Select Filter > Noise > Add Noise and set the amount to 25% with Uniform distribution and make sure Monochromatic is checked. 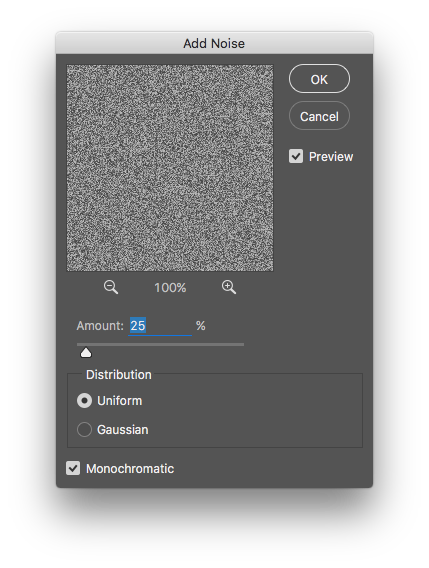 The first thing you’ll notice is that this amount of noise is way over the top – far too much for any serious application. But we’ll adjust that in the next step.

We want to adjust both Opacity and Fill on our noise layer to get the noise back to an acceptable level. Remember, the key here is to add just enough noise to kill the banding, but not so much that our gradient appears noisy. I generally like to start around 20% each, Fill and Opacity.

Since they work in tandem, I want to adjust both, not just one or the other. They don’t have to be exactly equal, but it helps to have them fairly close to each other.

For more on this, check out The difference between Brush Opacity & Fill and Layer Opacity & Flow article by Michael Wolosznynowicz.

The important thing to note here is that how much noise you need to use will depend greatly on the final size of your image as well as the tonal range in your gradient. As you adjust the level of visible noise, zoom in and out to make sure you can see both noise and banding properly.

If you haven’t already, save your gradient.

Lastly, you should either open the gradient as a Smart Object and drag it into your image or Place it in your image by going to File > Place Embedded…

Similar to 16-bit files, any Smart Object will use more system resources. However, adjusting the gradient as a Smart Object will allow you to further refine its shape, contrast, and color as it appears in your image.

At this point, you may also need to further adjust the level of noise by changing either Fill or Opacity or both. Once you have the gradient placed and the noise and banding appear acceptable, you can rasterize the Smart Object if you need to reduce your file size or optimize your system’s resources. 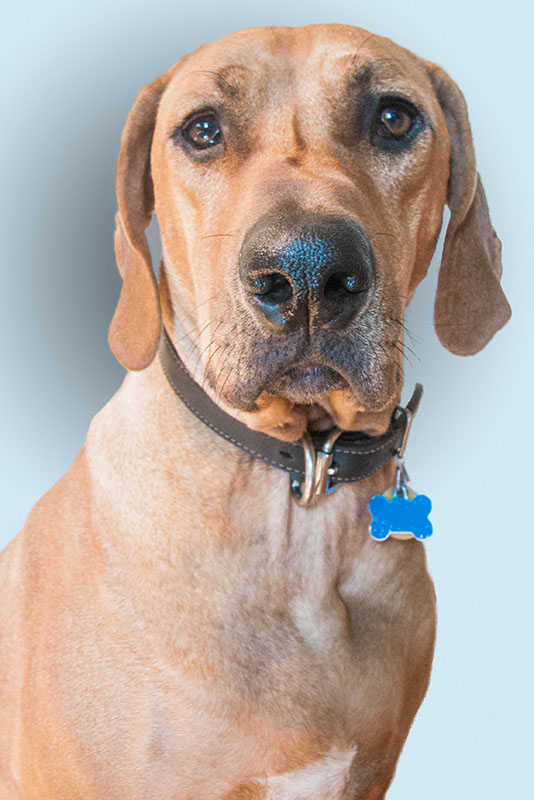 Try these steps out next time you need to replace or add a background in your images!

It's no news to anyone that we see women comprising the bulk of subject matter in fashion, editorial, cosmetic, and social media imagery, so it's not surprising that almost all retouching education and workflows revolve around techniques that serve...

END_OF_DOCUMENT_TOKEN_TO_BE_REPLACED

Color grading images is an essential aspect of post-production. Just as films are always color graded to instill a certain aesthetic or mood, the same is often true when retouching a stylized photoshoot. This quick tip by Kevin Roodhorst...

END_OF_DOCUMENT_TOKEN_TO_BE_REPLACED

Working With Selections: The New Select and Mask Feature

Adobe Photoshop CC 2015 recently released their 5.0 update which brought us a revamp of the already useful tool formerly known as Refine Edge. Let’s look at what’s new and how we can take advantage of this new update...

END_OF_DOCUMENT_TOKEN_TO_BE_REPLACED

We recently had a lengthy discussion in our Retouching Academy Community group regarding the importance and definition of image resolution. Even though it is pretty straight forward there is still a lot of confusion. With this quick post I...

END_OF_DOCUMENT_TOKEN_TO_BE_REPLACED

Practical Use Of Clipping Masks in Adobe Photoshop

In this tutorial we will cover what Clipping Masks are and how to create them in Photoshop. We will also touch on some retouching scenarios when they can be very useful. KEY POINTS: Clipping Masks allow you to apply pixels...

END_OF_DOCUMENT_TOKEN_TO_BE_REPLACED

These are the things every visual artist must know and understand. LIGHT & COLOR  If you want to learn to manage color, it helps to first understand just what it is: Color is a property of both an object and light, and...

END_OF_DOCUMENT_TOKEN_TO_BE_REPLACED

BRUSH OPACITY vs. FLOW While most people starting out with Photoshop tend to utilize Opacity slider and leave Flow untouched, knowing the difference between the two will allow you to select the one that will perform best for a given...

END_OF_DOCUMENT_TOKEN_TO_BE_REPLACED

Bit Depth is a metric of how many unique colors are in the color palette of an image that are used to represent each of the colors. This is not to say that the image will make use of...

END_OF_DOCUMENT_TOKEN_TO_BE_REPLACED

Image File Formats One of the main criteria that distinguish different file formats is image compression. Compressed files' size is significantly smaller and allows us to send or upload them on the web, or simply have a higher number of...

END_OF_DOCUMENT_TOKEN_TO_BE_REPLACED

One thought on “Creating Banding-Free Gradients In Photoshop”