On May 8th, 2019, Adobe mysteriously pulled all but the two most recent versions of their applications for download. Immediately following this announcement, however, actively subscribed customers began receiving e-mails from Adobe informing them that they are no longer licensed to be running older versions of the software, and could “be at risk of potential claims of infringement by third parties.” 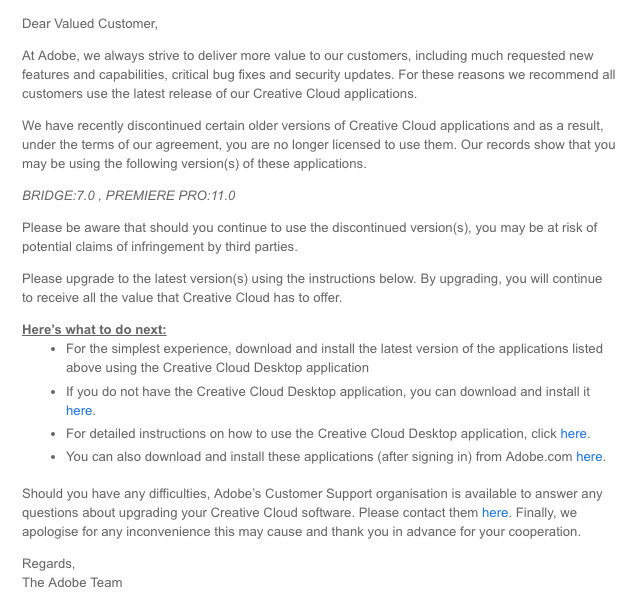 In a response to customer concerns on Twitter, Adobe stated the following:

Customers who continue to use or deploy, unauthorized versions of Creative Cloud may face potential claims of infringement by third parties. We can not comment on claims of third party infringement, as it concerns ongoing litigation. ^CS https://t.co/wx2K8MXov9

The “ongoing litigation” referenced above is likely a suit brought against Adobe by Dolby in March of this year. The legal complaint was filed with the US District Court and the Northern District of California, stating that Dolby is seeking a jury trial over issues of “copyright infringement and breach of contract” against Adobe. While this would explain why customers running older versions of Premiere might be affected, customers have also received the same message regarding the use of Photoshop and Lightroom Classic.

This presents a quandary for those users that are running older versions for a variety of valid reasons: improved performance, using an older machine, or compatibility with plug-ins. However, it’s clear that Adobe wants their customers running only the latest versions of their software, and nothing else.