In this final part of the series, I will describe some of the tools I use to generate and develop story ideas to make them compatible with the photographic medium.

You can find Par 1 and Part 2 of this series here:

Storytelling in Concept Photography. Part II: The Mechanics Of Storytelling

Do you have difficulties getting inspired sometimes? I do, and not just on occasion! With a million things going on around us, it can be difficult to focus and get inspired, but there are a few things I’ve discovered that help foster creativity:

As a stimulus, I love to play a little game in my head that helps me come up with idea sparks. It’s really something everyone can do and it’s a lot of fun.

Here’s how you play: Sit down and look around you, then start to turn objects upside down (in your head!!), either visually or functionally. Switch objects that have a relationship like the gardener and the flower pot, which might end up as a flower that irrigates a gardener sticking out of a plant pot. In other words, turn reality upside down. Be silly!

The following are just a few examples of this mind game:

Neither of these ideas were some stroke of genius; rather they were triggered by everyday items from my surroundings  and playing the simple mind game.

Go ahead, try it, daydream away!

Alternatively, try to re-imagine the size of objects or people around you. Keyholes almost as big as doors, tiny washing machines, giant flowers. As you imagine these things, your brain automatically tries to make sense of them and imagines how the environment would adapt. Then ask yourself, what does it all mean?

For example, what’s the meaning of a giant message in a bottle to a person looking at it bobbing up and down on the water. Maybe it’s a huge cry for help, but because the cry is so loud, the person chooses to ignore it the way many people do with cries for help from third-world countries or war zones.

Does the notion of playing mind games seem a little childish to you? If so, remember that your inner child is the single most creative source of inspiration you can tap into!

To illustrate this, here is a project that started just this way… 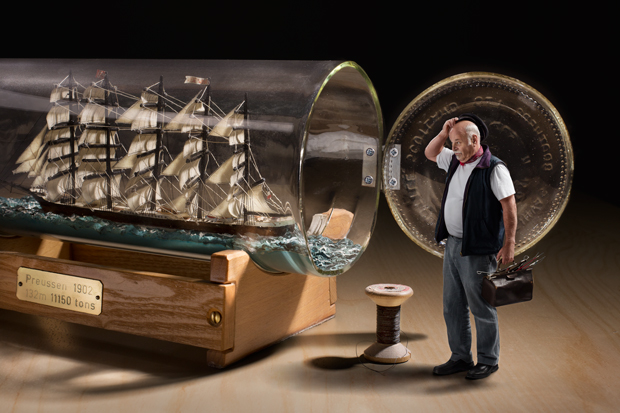 I was extremely lucky to have found one of the few remaining people in Switzerland who build these wonderful little pieces of craftsmanship. And I was even more lucky that he was a great guy who was willing to play along with my shenanigans. 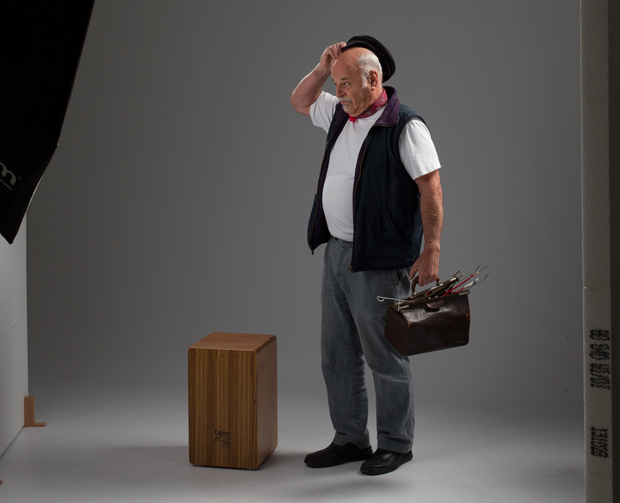 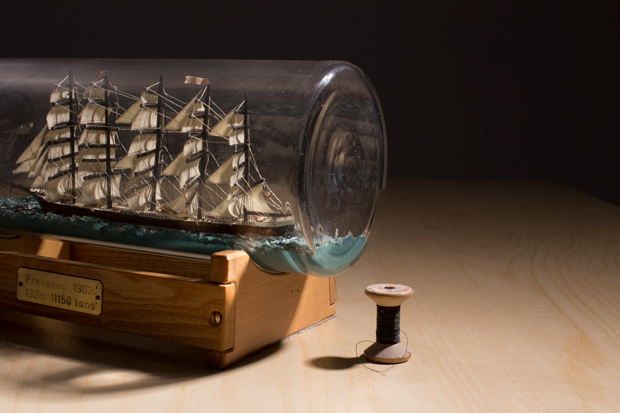 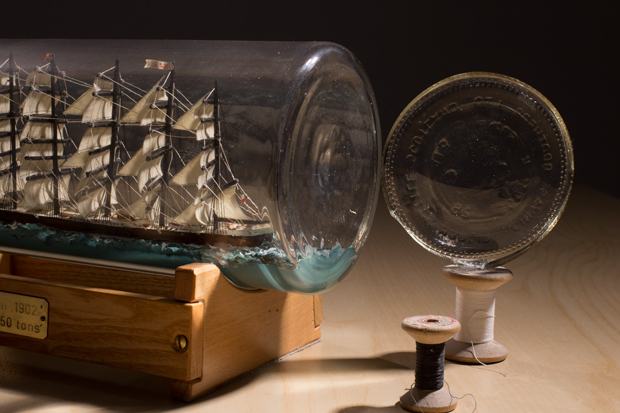 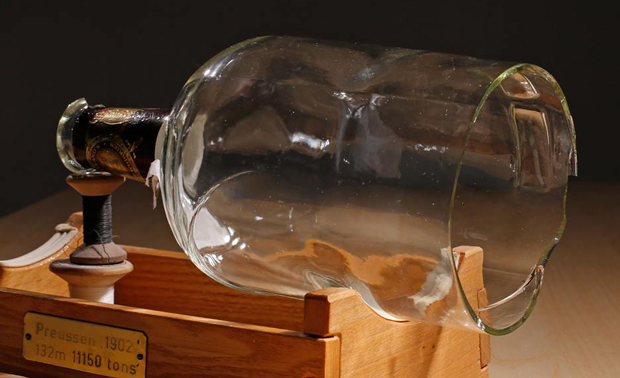 Writing down your story definitely helps. The process of writing lets you walk the path alongside the main character. In the process, many of the finer details of the story emerge, seemingly all by themselves. Since we are conceptualizing for a visual end-media, the ultimate tool, however, is the sketch drawing. By drawing, you are pre-visualizing and therefore, in a way, simulating the shoot by:

Drawing is such a powerful tool that it could almost be considered cheating! Don’t agree with me? Well, think of it this way. A person drawing a sketch is chimping. Constantly! And have they ever gotten a snide remark for it? Never!  … kidding of course.

I make a habit of drawing all of my conceptual photo projects, often in a couple of iterations. But if I’ve completed a drawing that really works, I can be confident that the photo itself will look amazing. This boost of confidence helps me through technically difficult shoots, because I know exactly where I am headed and what needs to happen to get me there.

In geek talk, with less variables in the equation, the problem becomes easier to solve. A little bit of actual drawing skill helps, but I wouldn’t say it’s crucial. Just a rough outline and maybe some white and dark brushes to add highlights and shadows. I know very successful conceptual artists that get by with stick figures!

Here are two sketches for the project, “Seamstress Of Her Own Destiny,” from the first article of this series. The first sketch is the initial drawing of the idea. As you can see, the basic idea is certainly there. However, once I’d found a location to shoot this project, the location provided me with its own little story to tell which I simply could not ignore. So, I started with another sketch that would incorporate the slanting roof. While drawing the construction beams, I had the idea of the spiraling vines and a lamp hanging from the end, since there was really nowhere else to put a lamp in the picture.

Such additional embellishments come very naturally when drawing because your attention focuses on one area at a time and you are in a state of constant decision-making. Each line is the result of a decision. And since you see the result immediately, you are constantly judging whether or not you are heading in the right direction. Like I said… chimping! 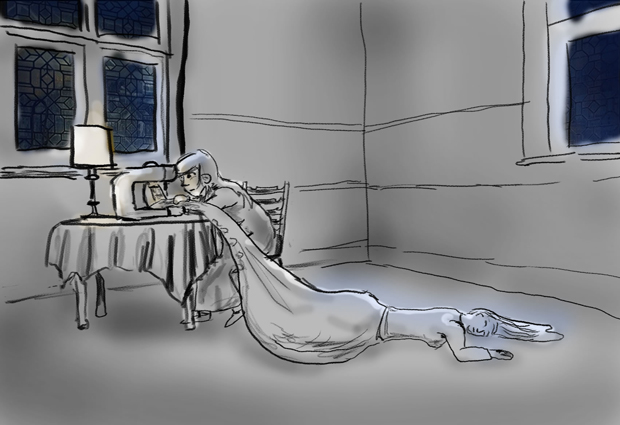 Seamstress Of Her Own Destiny, early sketch 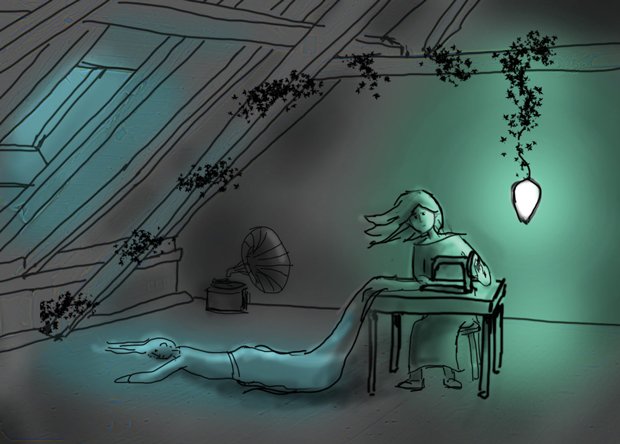 Making the Story Round

Did you ever notice that in almost every good book there is a strong relationship between the beginning and the ending? The hero coming back home, the protagonist solves the mystery but in the process, uncovers another even larger mystery. Or the end coincides with the beginning and lets us finally understand it. It’s like the metaphorical snake that bites its own tail.

I am aware that this is getting a little bit philosophical here, but bear with me. Here is a one-dimensional example: Imagine a girl stepping through a door that leads from a dark room into a brightly lit, warm room. While this can undoubtedly be a very strong image, her journey is (so far) one-dimensional, from darkness to brightness.

Now, this could be more interesting conceptually if there were a way leading back in the opposite direction. The girl doesn’t even have to be the one who is moving back, but it could be a visual motif like the vines in the sketch above — something that leads THE EYE back to the beginning. This will keep the viewer’s attention within the frame, his thoughts lingering, his eyes following the paths suggested by your composition and choice of directions.

So, should you always go for elliptical stories? No, that’s not the case at all. Your story might well call for a trajectory to follow. As with a lot of suggestions I have given you in these three articles, considering the “path” of your story is something that might help you raise your awareness about the depth of your concept.

As you’ve perhaps discovered, storytelling in concept photography is a vast area that is attuned to your personal preferences. Still, I was a little disappointed that so few resources seem to exist concerning photography and storytelling in its original, narrative interpretation. The closest things I found concerned documentary photography and contemporary fine art photography — neither of which are particularly helpful to me with regard to storytelling in a traditional, narrative sense. So I found myself having to piece information together from different genres: film-making, comic designing, literature, and poetics (the art of creating narrative and drama).

I know we’ve covered a lot of ground, but I sincerely hope you don’t see this as a kind of lecture, but more as a sharing of discoveries, approaches, concepts, and most of all, inspirations for new creative work processes.

With this being a distinctly non-technical trio of articles, I’m well aware that I might have missed the boat with some of you. For one thing, Retouching Academy is a website first and foremost for retouchers! But as I’ve followed the postings on both the Retouching Academy’s website and its highly active user base on Facebook, I see massively impressive contributions from the community that show me that many of you enjoy the conceptual stage very much as well.

Please don’t hesitate to contact me if these articles have struck home for you or if you feel I have completely ignored an important aspect of storytelling in photography. I look forward to your comments, critical feedback, and individual experiences.

Photographer & photo designer from Zurich, Switzerland, available for commissioned advertising and marketing projects.
You can see more of John’s work and follow him on his:
Facebook: https://www.facebook.com/obsoquasi
500px: http://500px.com/obsoquasi
Website: http://obsoquasi.ch/

David Campbell – Photography and narrative: What is involved in telling a story?
Robert Bradley – 6 easy ways to give your photographs a compelling narrative
Photogrist – Narrative Photography by Ryan Schude

Felix Hernandez Rodriguez is a conceptual and commercial photographer and graphic designer from Cancun, Mexico. Today he shares his Guide to Toy Photography which is designed to help all enthusiasts in this genre create realistic images by using a few...

END_OF_DOCUMENT_TOKEN_TO_BE_REPLACED

Storytelling in Concept Photography. Part II: The Mechanics Of Storytelling