The digital age has given rise to a new type of criminal: sophisticated scammers capable of repeated feats of social engineering and elaborate long cons. The Hollywood Reporter initially broke this story, about a suspected group of scammers that were targeting a wide range of marks from Hollywood elites to freelance photographers. If you’ve finished binge-watching the recent documentaries about Fyre Festival, we highly recommend that it’s time to educate yourself on fraud that could potentially hit much closer to home.

The most recent iteration of this scam operation was revealed by travel photographers and bloggers Henry Wu and Zory Mory of This Life of Travel. They received a business inquiry from what appeared to be Wendi Deng Murdoch, a Chinese-American businesswoman, who was interested in hiring them to capture photographs for an exhibition meant to preface events for the Beijing 2022 Winter Olympics. The initial e-mail appeared authentic (pictured below), with few red flags raised. 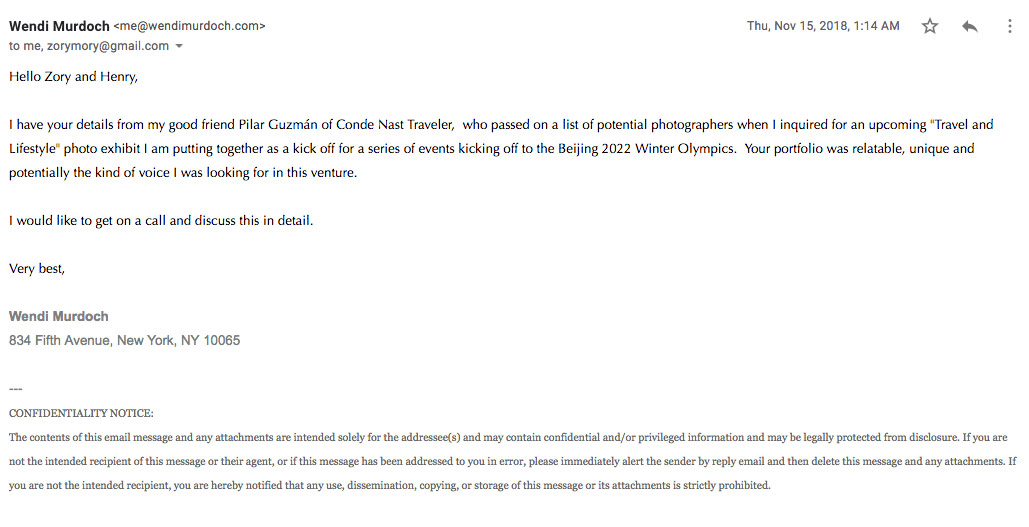 Source: This Life of Travel

The sender had a seemingly legitimate domain name, referenced a recognized contact for a publication that the photographers had just recently discussed working with, and offered reasonable detail and a request for a follow up over a phone.

The offer of the phone call tends to make most inquiries feel immediately more legitimate, because of that slightly more personal, human touch. We highly recommend you read Henry’s and Zory’s story below.

FURTHER READING: How An Elaborate International Scam Is Making The Rounds Among Instagrammers & Photographers

A colleague of mine was approached by an entrepreneur who was interested in hiring us to capture a hair campaign for his girlfriend’s new company. There were several e-mails and phone calls, where details began to emerge that set off warning bells.

The new “client” had no concern about the budget, accepting our rates without any need for more clarification or even any initial negotiation.

If it sounds too good to be true, it is. The client and his brand also had a nonexistent online footprint, an excuse for every reasonable inquiry, and the appearance of a “production assistant” that was going to coordinate every detail because the entrepreneur was currently in Dubai.

By this point, my BS-o-meter was in overdrive, and I began performing research on the e-mail domain names and supposed identity of the entrepreneur before my searching eventually yielded a name that was linked to a ripoff report on www.ripoffreport.com.

To be more thorough, I entered their name into the PACER service (Public Access to Court Electronic Records), and found his arrest warrant and subsequent indictment for a scheme or artifice to defraud, with wire frauds upwards of $200,000.

Needless to say, we canceled the production before any contracts were signed.

DON’T BECOME A VICTIM OF A SCAM

So how can you perform due diligence to avoid being duped by a well-crafted scam? While the earlier scenario involving the impersonated Wendi Murdoch is incredibly unique, the following steps may still help you to be appropriately cautious when screening new clients.

1. Verify that the e-mail address itself is not being spoofed. Watch out for any odd misspellings, errors, or e-mail addresses that turn into strings of letters and numbers.

2. Check domain ownership and details for creation date, as a freshly purchased domain could be its own red flag. Whois Lookup & IP has been around since the late ’90s as an industry standard, so that’s a great place to start.

3. Verify the sender’s identity. The information age has made privacy particularly tricky, but that can help artists verify who they’re talking to. Locate social media accounts, a LinkedIn profile, or any online presence, even just a phonebook or Google listing. No online footprint at all is a major red flag.

4. Be extra cautious when you are approached by an “assistant.” Find any corroborating proof to verify their identity, as some such characters are often just meant to be a smokescreen to insulate the primary perpetrator further.

5. Have a policy of not putting out any upfront costs for new clients that you haven’t been able to vet appropriately. This tends to be the most common scam among photographers, with check fraud or scams where professionals are manipulated into paying a fake agency or other entity up front for a production, only to discover that it isn’t legitimate all too late. There are situations where this may not be probable, where costs do have to be endured, but in those instances, set a limit for what you can live without, in the event that the worst does come to pass and those funds are gone for good.

6. Be very leery of Non-Disclosure Agreements (NDAs) with new clients, as these can be presented as a form of scare tactic for a later threat, so that you can’t report on any fraudulent activity that you experienced.

7. Talk to others in your industry. If something seems fishy, share the content that concerns you with trusted colleagues, or leverage a photography community that you feel safe asking in. When people work in a vacuum, it allows scams to spread unchecked.

A knowledgeable target is one that doesn’t become a victim, so please do consider the advice above, and share best practices in the comments that have helped you avoid similar situations.