Sharpness is the level of the clarity of detail in a photo and is a valuable tool for emphasizing textures of subjects and subjects’ details in an image. The sharpness of an image is described by two main factors: resolution and acutance. Resolution is the ability of the camera to distinguish between two very close elements in a photo, while acutance is the level of details at the borders of the elements of an image, in other words, acutance is the edge contrast of an image. 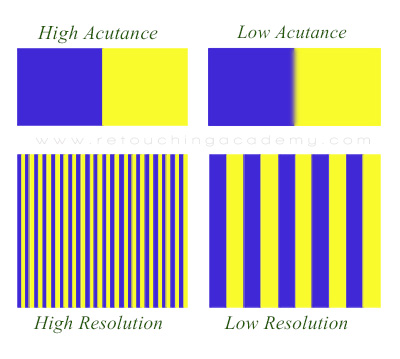 The traditional measure of image sharpness is described in line pairs per millimeter – the number of high-contrast pairs of lines appearing in the space of a single millimeter (lp/mm). The higher this number is the higher the sharpness of the image.

Some very high resolution B&W films and top pro lenses can reach over 100 lp/mm, but unfortunately very best color printing papers can reproduce not much better than 75 lp/mm, and the human eye isn’t able to resolve any more than between 5-10 lp/mm under the most optimum conditions. So, if you end up with 5-10 lp/mm on a print you will have a very crisp image, given the source digital image is sharp.

There are a lot of factors that can affect sharpness of an images at all stages of its creation.
The resolution is affected by:

Acutance is the only aspect of sharpness which is still under your control after the images have been taken, so when you digitally sharpen your images you enhance the acutance.

When digitally sharpening your images keep in mind what the images are going to be used for: on-screen or print.

If on-screen – what is the final size that the website you’re aiming to upload them to displays the images in? It is highly recommended to re-size and sharpen the images in your software, rather than allowing the website to compress them to fit the final viewing size.

For print: what type of paper the images are going to be printed on (photos appear sharper on glossy paper rather than on matte), what size and the viewing distance will be? In most cases, the larger the print size required, the larger the viewing distance will be (billboards and posters, for example). High resolution isn’t necessary for large prints, and the images will still look sharp enough from far away.

Keep these details in mind when digitally enhancing sharpness, as the optimal type of your sharpening may not necessarily be what looks best on your screen.

The focus is the point where rays of light come together sharply on the film plane or a digital camera sensor. The lens focuses the light rays emanating from an object, so that they converge at the digital sensor plane, passing through the aperture “hole”, the size of which is controlled by the pre-selected F-stop number, and during the amount of time controlled by pre-selected shutter speed.

The amount of the detail in an image that is in focus can be affected by:

1. Depth of field (DOF) – the distance between the nearest and farthest objects in a scene that appear acceptably sharp in an image.

The DOF is called shallow when smaller amount of detail in an image is in focus, in other words, the distance within which a scene appears sharp is shorter. The DOF is called larger (or greater) when a large amount of image details is in focus (most point-and-shoot cameras are manufactured to shoot with large DOF, so that the entire scene is always in focus). The greater DOF can be achieved by increasing F-stop numbers (each aperture (F-stop) will allow half the light through than the previous one).

2. The focus plane is always parallel to the digital sensor plane, unless you’re using a tilt-shift lenses, split-focus dipor shooting with a view camera (Scheimpflug principle).

3. You camera technique – again camera shake can reduce the amount of detail in focus, use a tripod when needed.

4. Appropriate shutter speed settings – if the object you’re photographing is moving, you need to increase your shutter speed and adjust your aperture and ISO respectively to make sure you can photograph the object and avoid motion blur.

WHAT IS ISO? ISO stands for International Organization for Standardization, and in terms of photography, designates an exposure index system devised by that organization. In essence, ISO is an exposure rating index that is used to tell you how sensitive...

END_OF_DOCUMENT_TOKEN_TO_BE_REPLACED

What is Image Noise In digital photography, image noise can be compared to film grain for analogue cameras. Image noise usually manifests itself as random speckles on a smooth surface and it can seriously affect the quality of the image....

END_OF_DOCUMENT_TOKEN_TO_BE_REPLACED

2 thoughts on “Sharpness Vs. Focus in Digital Photography”